Logistics and information management system for health laboratories designed to be accessible at regional and rural labs too. And architected to be reusable in different countries. 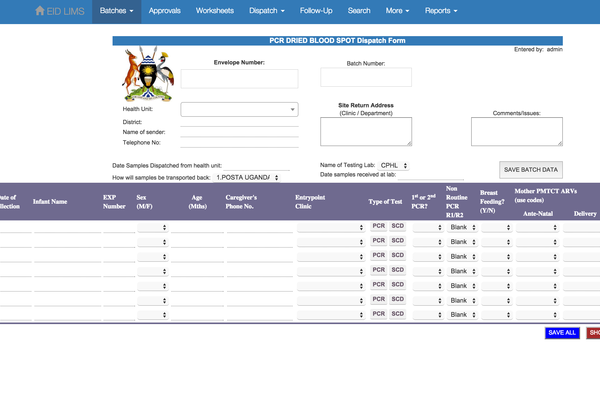 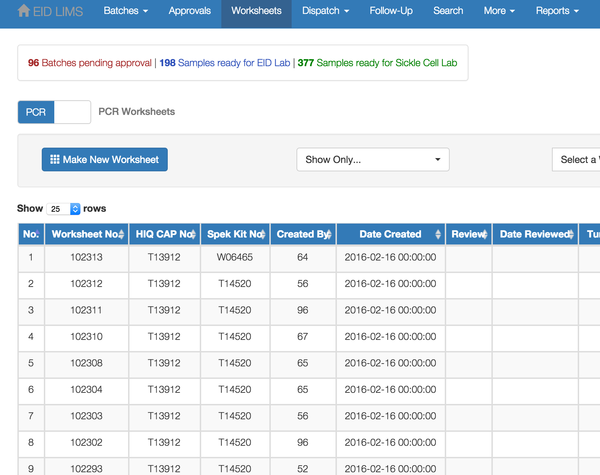 Workflow steps to get results out quickly


In Uganda, one central lab processes all HIV tests from public health facilities. The average turnaround time (TAT) for a citizen to receive his/her result after taking a sample at a rural facility is anywhere from 2-4 weeks. Currently this is because the sample has to be transported to the lab in Kampala, processed, and then sent back in paper form to the same facility. Then the patient, without being prompted, has to return to the health facility to receive their result (this happens
We’ve advised the lab on ways to speed up this TAT, including designing a “Sample Transport Network” which regionalizes results processing and uses local transport options to deliver samples and results.

But an easy win for us, from a tech standpoint, was to also focus on speeding up the workflow at the lab. So this system handles every step in the process: initial data entry, approval of data, worksheets creation for testing machines, and results processing and printing.


The lab has been handling this workflow digitally for almost 2 years, but we wanted a system that had security and role-based permissions architected throughout so that we could eventually grant digital access to results at the regional hubs and facilities (thus further chipping away at that TAT).

I joined the organization after the decision had been made to “revamp” the system, and development was already well underway on the new tool. Ideally we would have leveraged one of the many existing open-source options, but I made the decision to continue with our new system based on the:
1. Expected time necessary to customize those open-source options
2. Amount of work that had already been done on the new system by the time I joined

We organized weekly meetings with admins and data entrants alike to continuously test and plan each iteration of the tool, and within 3 months we launched our MVP (in Sep. 2015).


Now that this system is in place, we’ve begun to hand off maintenance of the core transactional tool to the developers at the lab. It’s built using a well-known web framework in Uganda (PHP’s Laravel), and due to a focus on quality documentation and back-end testing we’ve seen good progress on fully transitioning the system to them.

Going forward, we’re focusing much of our time on hacking at that overall TAT. We’ve been piloting (with mixed results) things like regional access, unique ID linking between mothers and infants, longitudinal tracking after results are received and HIV treatment has been initiated, and SMS reminders to patients to pick up results and return to facilities for planned treatments.